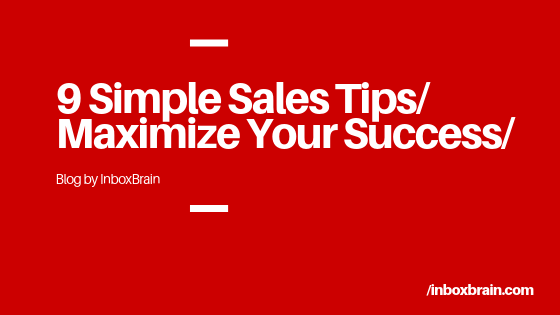 The Secret to Sales

What can you learn about sales from a man who was born in 1888 and died in 1955? Everything. Many successful entrepreneurs from Warren Buffet to Steve Jobs praise Dale Carnegie’s book How to Win Friends and Influence People for their success.

Carnegie had a knack for sales. Straight out of college he began working as a national salesman for Armour and Co., an established firm in the meatpacking industry. He quickly rose to become the top performing national salesman at his company. A short time later business executives from all across the country sought Carnegie to speak, lecture and motivate their sales forces. His sales strategy was simple: Take a genuine interest in the lives of others.

Here are nine sales tips based on the principles Carnegie outlines in the book.

Carnegie called it “a simple way to make a good first impression.” Every business encounter — across the desk, at the customer’s front door, and even on the telephone — should begin with a smile. “Actions,” Carnegie noted, “speak louder than words. And a smile says, ‘I like you.’”

Customers and clients want to hear what you have to say, but they want you to hear what they have to say first. Beyond that, consider this: How can you, as a sales rep, know what customers need if you don’t give them a chance to tell you?

It almost sounds poetic. Carnegie cited Harry A. Overstreet as the originator of this idea. Overstreet said, “Action springs from what we fundamentally desire.” If you own a bait store, understand that customers do not desire night crawlers; they desire catching fish. Pitch accordingly.

Learn the names of your employees, your customers, and your prospects as they enter your sphere of business. After you learn those names, use them. Carnegie’s principle here is simple: A person’s name is, to that person, the sweetest and most important sound in any language.

This would seem to be almost a “given,” but far too many salespeople, perhaps in their zeal, engage in arguments with a customer who shows resistance or says he or she likes another brand. Carnegie said, “The only way to get the best of an argument is to avoid it.” Be respectful of the customer’s opinion. Do not argue, criticize, or condemn. You will have an opportunity to brag about your offering soon enough.

If, at any point in a sales transaction or pitch, you discover you have made an error, don’t make excuses. Say you are sorry and do so emphatically, Carnegie said. Then move on. You may be surprised at how quickly the whole incident is forgotten. If you insist on building a case for why you erred, you’ll only drag things out.

Tip 7: Let customers sell to themselves.

In general, people do not like to be told what to do or what to buy. Provide information and be helpful, but let customers make the decision. You do this by asking questions and steering the conversation until customers realize that your product or service is the solution they’ve been looking for.

Tip 8: Ask what’s in it for customers.

When discussing your product, put it in terms that speak to your customers’ interests. You may have the biggest, fastest, and most reliable product on the market, but unless customers see how it benefits them, you won’t make sales.

This has less to do with human interaction and more to do with a flair for the dramatic. Do not be afraid to engage in a little showmanship, as long as it is honest and doesn’t mislead people. For example, Carnegie tells the story of a cash-register salesman who told a grocer that the registers his store was using were so old that he was literally throwing money away. With that, the salesman threw a handful of coins on the floor. He got the sale.

In simplified terms, a sales transaction is an agreement between two people; whether in person, through email, or over the phone. One party is looking to purchase a product or service and the other is interested in selling one. The conversation in between acts as the drawbridge over the moat of resistance. Once the bridge is fully on the ground the transaction is complete. Dale Carnegie’s secret to sales success is simple: Take a genuine interest in the lives of others. Now use these 9 tips to lower that drawbridge and cross that moat into the kingdom of sales success.

Are you currently using InboxBrain and love the results? We’d love to hear from you! As extra incentive, all interviewees receive one month of InboxBrain Free.

New to InboxBrain? Start your 14 day Free trial now and automate your inbox.